Last October we released an anthology called Sins of the Past. This year we decided to release an anthology called Sins of the Future. Every story is set years into the future where anything is possible, from self-driving cars to aliens taking over the world. Each story is unique in its own light because each author took their own views of the future and twisted it to become the stories that are featured in Sins of the Future that is set to release October 31, 2015.

Sins of the Future features:

They by Jackie Pitchford

In the Driving Lane by Misha Burnett

The Verge by R.L. Andrew

The Man with Bio degradable Skin by Angela Garratt

The Nyghtmare Machine by Don Miskel

The Day Everything Went Still by Leticia Toraci

Now that you know all the stories and authors featured in this amazing, futuristic anthology and you know when it’s to be released, it’s time for the big cover reveal. 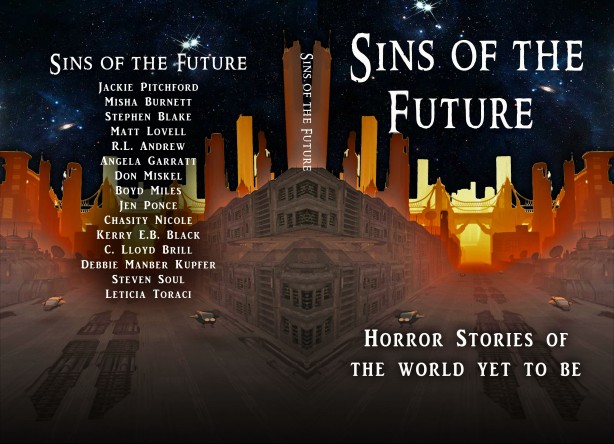 Our cover was created by the wonderful Cleve Sylcox who was an author in Sins of the Past.

Sins of the Past is available on Amazon

One thought on “Sins of the Future Book Cover Reveal”